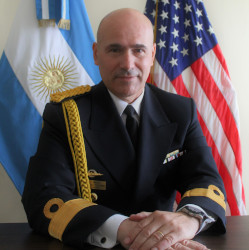 
Navy Commodore Enrique Antonio BALBI is the Argentine Naval Attaché.
He is 53 years old and he is a native of Bahía Blanca, Buenos Aires, Argentina.
He is married to Patricia and he has a daughter, Belén (26), and two sons, Matías and Nicolás (28), twins.
He graduated from the Argentine Naval Academy in 1988, and completed studies for service as a submarine officer, following his father's steps, also a submarine officer. He is also a graduate in Naval Systems from the Naval University Institute (2000).
He holds a master’s degree in Organizational Communications Management from Austral University (2017) and he is currently pursuing a master’s degree in University Management at Mar del Plata National University.

He also completed several courses and seminars, among others:

His shore and staff assignments, among others, are:

At-sea, he served as: